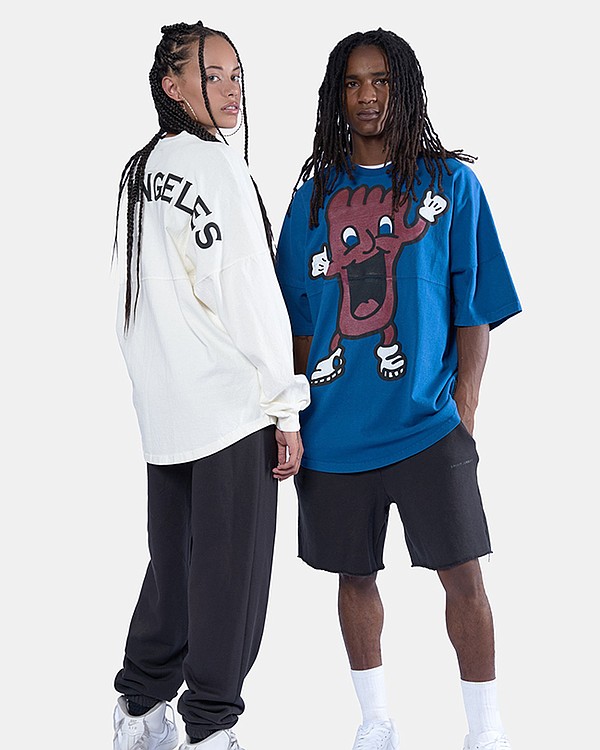 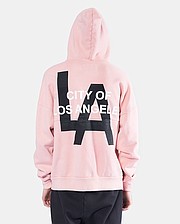 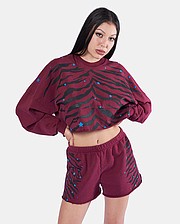 Looks from Spirit Jersey’s Love Letters to Los Angeles line. Styles include an homage to the landmark sign of the Silver Lake Foot Clinic and tiger-stripe designs.

After making signature tops for partners such as Disney, various top tourist destinations, as well as college sororities for more than two decades, the Los Angeles–based Spirit Jersey opted to make a solo project inspired by its hometown.

Spirit Jersey released its Love Letter to Los Angeles on its direct-to-consumer channel, spiritjersey.com, last month. The line’s graphics give a tour of Los Angeles neighborhoods as well as shout-outs to some locally known landmarks such as the Silver Lake Foot Clinic sign. A favorite of the residents of the Silver Lake neighborhood for decades, the sign featured a cartoon-style foot that had been displayed until the clinic moved out of the area in 2019.

The graphics and the neighborhood monikers have been placed on the brand’s signature bodies, which were unique enough that, in 2012, the United States Patent Office awarded the label a trademark. Spirit Jersey’s idiosyncratic fits feature the silhouette of drop shoulders, double-knit stitching on the yoke, a scallop-shaped hem, as well as a unisex, oversize fit. The baggy fit allows for a large canvas, said Jake Ptasznik, Spirit Jersey’s president.

“We print 26-inch-wide art directly onto the garment-dyed shirt,” Ptasznik said of the overall look of the brand’s tops.

Spirit Jersey has been making these kinds of shirts since the mid-1990s and developing a client base of high-profile partners including everyone from Disneyland and Harvard University to the Los Angeles Dodgers and Tapatío Hot Sauce, which helped the brand cultivate a space for its products as high-end souvenirs, said Courtney Todd, Spirit Jersey’s director of sales and merchandising.

“It became a classic, [social-media] post-worthy garment,” Todd said of the Spirit Jersey. Her team noticed that people would tag the shirts on social media when they posted pictures of trips to Los Angeles on Facebook and Instagram. “Everyone stands at their favorite place, in front of a university, at a beach in Malibu or in front of the Disneyland castle,” she said of the vacation backdrops featured in posts.

Trevor Larson, Spirit Jersey’s national sales manager for ready-to-wear, said that the company was interested in building a higher profile. But they were looking for the right platform.

“We didn’t have a clear brand voice,” Larson said. “We wanted to give our fans a chance to purchase directly from us. We wanted an opportunity to put our voice on our apparel.”

For the first run at a ready-to-wear collection, Spirit Jersey chose a city theme it felt would gain attention from denizens of the megalopolis of Los Angeles, as well as visitors and people who would want to spend more time in the city. Many of the shirts feature big graphics bearing large letters that spell out the names of Los Angeles neighborhoods such as Venice, Fairfax, Hollywood and Koreatown. Other pieces run the names of city areas in other languages such as Spanish, Arabic and Korean. There are landmarks that only locals would know, such as the popular neon clown sign for the former Hollywood Star Lanes, which was featured in the cult film “The Big Lebowski.” The line also features graphics of landmarks such as the Griffith Observatory accompanied by graphics of stars and the motto: “Where the stars are.”

Other items feature graphics of tiger stripes, marijuana leaves and the state’s flower—the California poppy. Designer Giselle Gonzalez said that since there were no partners with the Lover Letter to Los Angeles project, the line’s designers had more creative freedom.

“We can explore different treatments and different washes that we initially couldn’t do,” Gonzalez said.

The entire Fall/Winter 2020 line of Spirit Jersey was made in Los Angeles, and about 95 percent of the line’s Spring ’21 line is made in L.A. Los Angeles artisans also created special effects for the line such as airbrushing and studding garments with brushed nail heads and rhinestones.

Core price points for the tops range from $84 to $150. Special pieces, such as an organza duster, run up to $500. Other styles in the Love Letter to Los Angeles line include sweat shorts, sweatpants and crop tops. Colorways range from dusty pinks to royal blues and black. The collection also has unique styles such as a top made from different quilt fabrications to make a garment that comprises an array of separate pieces.

The company plans to write more love letters to places outside Los Angeles. An upcoming collection will send love to New York City and its environs.