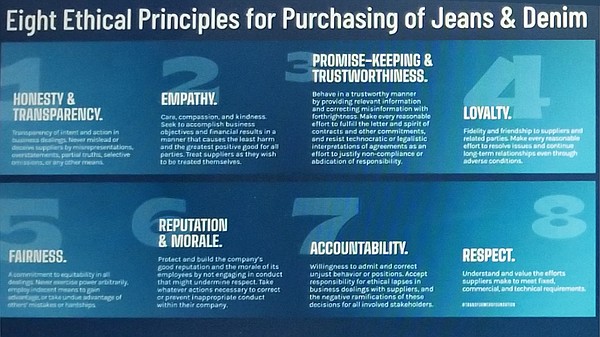 In its report “Ending Unethical Brand and Retailer Behavior: The Denim Supply Chain Speaks Up,” the Transformers Foundation identified behaviors that hurt suppliers and provided solutions for a sustainable industry, which includes its “Eight Ethical Principles for Purchasing of Jeans & Denim.”

Established early in 2020, the Transformers Foundation was launched by Kingpins founder Andrew Olah of Olah Inc. to support denim supply-chain professionals by affording them opportunities to engage in discussions of creating more-responsible manufacturing.

“One of the things that is extremely noticeable is that the people who create the product—the factories, chemical companies and garment factories, the people that do a lot of the work to make a garment happen—know a lot about the process of production,” Olah said during a recent webinar. “The foundation was set up so that the suppliers and supply chain, the transformative people, could get together to implement change and be a force in the process of making a sustainable industry.”

On Oct. 27, as Olah prepared to unveil his latest edition of Kingpins24 Amsterdam, running through Oct. 30, the foundation released its first report, “Ending Unethical Brand and Retailer Behavior: The Denim Supply Chain Speaks Up.” The report revealed an imbalance of power that affords privilege to brands, retailers and importers while suppliers suffer extended terms, canceled orders and discounts demanded outside of agreed-upon contracts in an industry that is over capacity.

“The intent of the report was to identify the root causes of the power imbalance but also to put forward actions that are doable, realistic and effective,” explained Marzia Lanfranchi, the Transformers Foundation intelligence director and a report co-author. “[The denim industry] is a small community, but we can inspire others in the apparel-and-accessories sector to follow and enact long-term change.”

To create the report, a survey was sent to 79 of the world’s major denim suppliers offering anonymity. Despite the ability to remain anonymous, many of these companies declined to participate due to fear of retribution from brands they consider partners. The report reflected feedback from 25 respondents.

Due to the terms outlined in their orders, suppliers begin and finish projects for their partners but are left financially vulnerable should the customer decide to decline the goods upon completion. Under the topic of sustainability, when a brand declines to pay for its orders or vastly alters terms after a contract is agreed upon, its sourcing partner is left without the resources to create a safe, healthy, enjoyable working environment for its workers.

In addition to providing education regarding best practices, outlining a call to action and establishing ethical principles to be followed by brands, retailers and importers, the Transformers Foundation will soon introduce its Ethical Denim Council, which will comprise a group of professionals hailing from outside the industry who will mediate issues between suppliers and brands.

“We created a set of ethical-production principles,” Olah said. “Our ethics are respect and keeping your order. They are not big asks. They are fundamental.”